We arrived at Changi Airport after an awkward stop at Darwin, from midnight until six.am.  Local time in Darwin confused us for a while, and we considered going in to the city until morning, but we were disuaded by the fact that we couldn't check our luggage in until four o'clock.  The airport had the only duty free shopping I did during the trip though, a $2.99 bottle of vodka.
After an impressive and luxurious airport breakfast, we were on board another plane.  I vowed to sleep, since I'd been awake for around 24 hours, but as usual was less than successful.  As the plane commenced its descent into Singapore, Jax and I resumed an earlier discussion about how we'd reach the island from the airport.  We'd learned that taxis are affordable, but, since we were arriving at nine.am and couldn't check into our hotel until three, I insisted we try taking the train.
I picked up a network map as we passed through Arrivals and plotted a course to Sentosa whilst we waited for out overnight bags to emerge onto the baggage carousel.  It looked simple enough, and proved to be such, with the most complex part being finding the way to the airport station.  I'd won the case for the train with the concession that if anything went wrong, we could disembark and take a taxi at any time.  The only unexpected moment came when a pre-recorded announcement aboard the automated, driverless train reminded commuters that they could press the emergency button upon sight of what it described as 'suspicious individuals.'  A moment later, the train jerked to a slower pace, and another recorded message advised that the emergency button had been activated, and asked that we remain patient as investigators boarded the vehicle to determine the reason for the delay.  Luckily, it wasn't us.
A bus took us from the mainland to Sentosa Island, where I was pleased to find that our room was ready early:  I'd been wearing the same clothes since leaving home around 35 hours earlier and really wanted to shower and clean my teeth.  I had also thought a nap might have been a sensible choice, but instead we headed out to explore the island.
The clean, Vegas-y atmosphere of the first actual resort town I've been to was inescapable, but fun to move within.  Unashamedly artificial, we started by navigating our immediate surrounds - American and Asian franchises and upper-midddle priced casual dining - and gravitated, perhaps predictably, towards the casino.  Unexpectedly though, we did not enter.  Maybe it was an acknowledgement of our limited time.  Instead, we set about circumnavigating the island, vowing to stop at everything that looked interesting.
Emerging from an articifial cave and waterfall that was the habitat of some turtles, we decided on the Chili Café for lunch, and my first Singapore Sling (of this trip.)  Spreading a map on the table, we identified points of interest over our next round.  Jax suggested we stop at the hotel we'd first considered reserving, the Siloso Beach Resort, until a cheaper option - the Festive Hotel - had appeared.  So we headed from lunch to Siloso Beach.  I appreciated this style of beach, overlooking a shipping port, and dotted with fully serviced bars.  We found the Resort hotel and ordered some drinks from the modest menu, and felt glad that we'd found the Festive Hotel.  Though cheaper, it was much grander and more centrally located.  Looking over my drink to the jungle-like surroundings on either side of the hotel's bar, I wondered aloud if Sentosa is home to monkeys, and scanned the treetops for evidence of any.  As though in answer to my question, we heard scurrying footsteps over the the verandah's rooftop, and I was not disappointed to see that they belonged to squirrels rather than monkeys.
While we were finishing our drinks, we heard the bass sounds of a party nearby, so we followed it to the Asian DJ finals, taking place inside Wave House, a bar which was also home to a wave pool for surf practice.  I added fake-surfing to my to-do list, and we took a seat in a cabana to hear the finalists perform.
En-route, I'd convinced Jax to join me at street luge by buying two passes before he had a chance to object, entitling us to four rides each.  We'd taken two before going to explore the bars of Siloso, and decided to use the remaining passes after some drinks and nightfall.  After leaving the DJ finals disappointed - I've never enjoyed DJ shows, bar service was unavailble, and table service seemed slow to the point of nonexistance - we went to a beach club called Óla.  Exactly my kind of place, the Tiki themed club quickly served me an icy, yet burning cocktail as we watched a wicked thunderstorm brewing over the ocean. 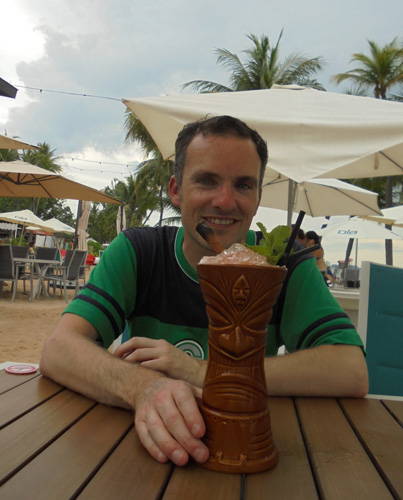 We remained sheltered under our parasol as we watched the lightning and swimmers disregarding the increasingly urgent announcements of lifeguards to leave the water.
As darkness fell, we returned to use our remaining street luge tickets to find the chairlift to the top of the slope closed due to lightning.  I worried that we would miss out on our last two rides, but Jax remained stoic - we could check back after the next bar, this time 'Beerkini,' a Hooters rip off with ocean views advertising a frozen Bacardi cocktail special.  Whilst the waitress was unaware of the drink, I was deeply satisfied with whatever kinds of frozen drinks she brought me instead, and embarrassed both Jax and the waitress by asking a woman seated nearby to take a picture of the three of us together. 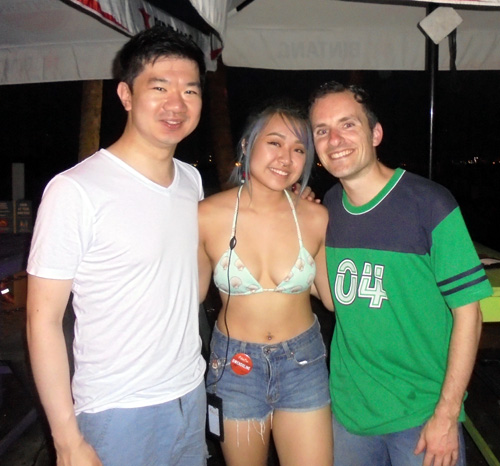 The woman turned out to be the bar's owner, seated with an Australian friend.  Noticing our accent, the friend seemed to feel an immediate sense of comraderie, and asked us what were were doing there.  Jax explained the long weekend trip, but was cut off by the owner's friend.
'No, no,' she snapped.  'I meant what are you doing here on Sentosa?  The drinking is much better at Clarke Quay.'
We took note of her point for our next day, observing that my mother had offered similar advice in a response to the email I'd sent her from Tullamarine Airport letting her know I'd be away.  After some more drinks, the luge circuit appeared to be operating again, and we took our last few rides.  Proving the impact of alcohol consumption on driving ability, I observed myself to be much more daring for these rides, though Jax had confessed to being surprised at my speed on all four trips down the mountain.
Our subsequent investigation took us back towards one of Singapore's famous Merlion statues, and, upon seeing it indeed unlit (my mother had also recommended seeing the 'Merlion Lightshow' on the island, though none of the locals we'd asked knew anything about it) we inevitably gravitated back to the casino.  Having ascertained our hotel's proximity to the casino, I agreed to a single drink and perhaps a meal - it was well after midnight, and we'd not eaten since the (mostly liquid) lunch.  The casino's security checks were noticably thorough, especially when compared to the nation's Customs check point we had sailed through earlier in the day, but we made it in.  We went in search of a bar.  It turned into an extensive search operation, which made us questions whether local customs were perhaps different to what we were used to:  observing the floor, gamblers were alone, smoking in some areas, but drinking nothing harder than the bottled water being delivered en masse by casino staff.  Could drinking and gambling in tandem be considered taboo?  It certainly seemed so, but we had during our investigation come upon the Casino Royale bar where a band called Uber Duber were performing - and taking requests.  We ordered a drink each, and stood out against the other patrons, all of whom had bottles of the finest spirits laid out on their tables before them.  On either side of us, we looked on in horror as barely-touched bottles of Hennessey and Grey Goose were cleared away to some mysterious back room, where I imagined and hoped staff might indulge upon them after their shift.
Meanwhile, Uber Duber had demonstrated their style: chilled out takes on hits, cycling between and an English then a Chinese song, and Gavin asked what I thought the most difficult song for a band like this to play might be.  I considered their line up - drums, guitar, piano and vocals - and thought of slipping a request note for Chop Suey, but between us decided that a more realistic request would be Elton John's Rocketman.  I'd also slipped the band a request for something by Ben Folds but neither were played.  Before they finished, the singer looked over to me, lone Guero in attendance, and apologised for not playing what she presumed (accurately) to have been my requests.
We had a few spins of some old fashioned mechanical slot machines before I was overwhelmed suddenly with fatigue.  In fact, it hit me like a tonne of bricks, in a way I don't know that I have ever felt.  Jax was still hoping to eat, but my exhaustion must have been visible.  He sent me to the room despite my offer to escort him to find food, and I barely noticed when he returned.
I guess I've learned that the longest this device can operate is around 48 hours before a recharge is required.
Collapse