Eric van Viele was an actor renowned for his work on stages throughout Germany.  Like many actors of the day, Eric was skeptical about the new medium film, in which some of his contemporaries were starting to dabble.  Hearing of the international attention being given to the so-called 'Expressionist' cinema of Germany, Eric reached out cautiously to F. W. Murnau.  Little is known of how the pair came to be acquainted, but Murnau granted Eric a role in his upcoming film Nosferatu.  Despite being a novice within the medium, and, in the role of 'Sailor' - a bit-part, little more than an extra - Eric van Viele became known as disruptive on set.  He questioned Murnau's creative and technical decisions, and the pair were frequently witnessed involved in increasingly volatile arguments.  Amongst the cast and crew, rumours were rife surrounding the exact nature of the pair's relationship, and even of off-set violence.  While Murnau was promoting his later film, Sunrise, Eric also spoke to the media, referring to the director as dummer hirnloser dummkopf. Finally, Murnau complained to his solicitor about what he described as Eric's slander.  Arrested on charges of defamation, Eric van Viele was executed three days later, despite charges never being substantiated.
Except that he wasn't.
I'd heard about the film Nosferatu, read articles about its deviations from its source material, viewed stills in film history books.  But I'd never been able to view the movie.  Channel 31 played old movies, but tended to stick to talkies.  Once I started university, I found that the library had a wealth of DVDs, purportedly for film students to draw on for precedent, but I don't think Man Bites Dog ever served as anything more than salacious entertainment.  Even with my CAVAL priveleges, I didn't find a copy of Nosferatu in any of the libraries.  Instead, in the summer before my final year of study in 2003, I found a copy of Murnau's film on a budget DVD produced thanks to the film's lack of copyright protection in a discount store.
Sometimes after anticipating a movie for a long time, I am disappointed when I finally watch, but this wasn't the case when I eventually viewed Nosferatu.  It was the style of the film that made an impression on me, in much the same way as 2001: A Space Odyssey had.  Unlike 2001 though, I made a note of several flaws in the copy of Nosferatu which I had watched.  The soundtrack chosen by the DVD's author to accompany the originally silent film seemed to be mismatched, and at times maybe chosen at random (though sounds like bells matched to vision on screen are less tacky in practice than I might have imagined.)  The caption cards appeared to have been translated too literally from the original German, and presented oddly in a typeface I recognised immediately as one I'd downloaded myself for an earlier project, a proxy of that used by Coca-Cola. 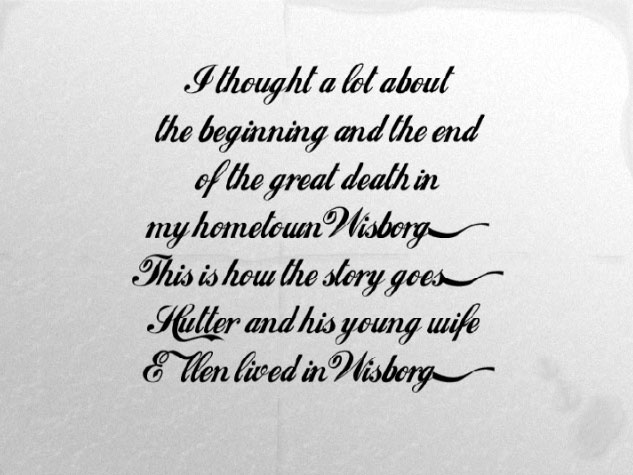