There was no Cola Festival last year.  I spent the time usually allocated to the festival overseas, though did sample a variety of European colas in recognition of the date, and, as a side note, tried Orangina at Sim's favourite café.  It was nice to return to the festival this year, so maybe this was why I sampled more flavours than I normally might.  Or maybe, in recognition of a poor release schedule for the last festival, there really was a lot to try.
Since I bought a SodaStream earlier in the year (and replaced it, before realising that all the store's stock were apparently supplied with empty gas cylinders,) the focus of this year was on home made cola, with a taste test between two brands of cola syrup:
SodaStream Classic Cola vs Soda King Cola: 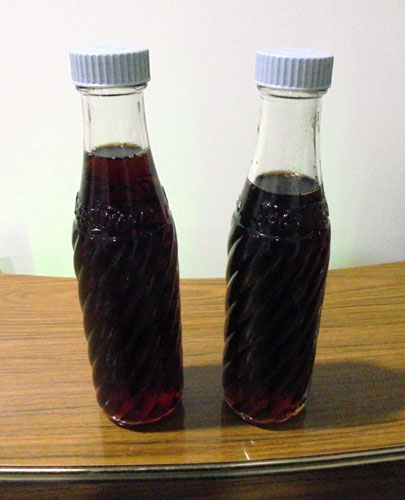 That is the SodaStream version on the left, and Soda King on the right.
With Rob and Jitka staying with me at the moment, Rob joined me for the taste test.  After sipping a glass of the first, he announced that 'It tastes like cola!'
I agreed with him, and, after cleansing our palates, we sampled a glass of the second, with Rob proclaiming that it also tasted like cola, and I agreed, the flavours being so close as to be indistiguishable.  We revealed the results of the blind test.  The first test had been the official SodaStream version, and the second Soda King.  While Rob declared the contest a tie, I decided that Soda King would be my DIY cola syrup choice: it is cheaper per bottle than SodaStream syrup, and also more highly concentrated, producing more cola per bottle.
LA Maxi Vanilla Ice: 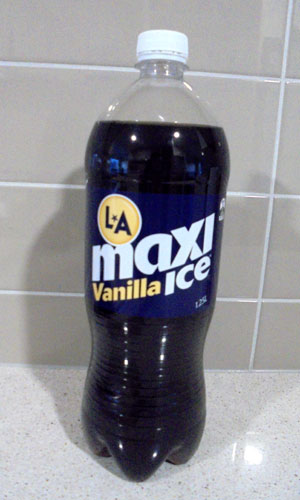 In February, I entered a competition to win a Ford Mustang.  On the day it was drawn, the promoter emailed me to tell me I had been 'provisionally selected' as the winner, and asked me to send prove of my identity.  I rushed to my parents' house to use my scanner on the ID and sent it, and the reply congratulated me, telling me that I was a winner of the consolation prize, a $100 IGA voucher.  I rarely shop at IGA, and hoped for some kind of exotic cola.
I was pleased to find a variety of LA Ice I'd so far never seen, Vanilla (along with a bottle of something called Sno-Drop, which I liked because it had a picture of a penguin on the bottle.)  I was less pleased when I was told that IGA vouchers are not accepted by all IGA stores, but paid cash anyway.
The vanilla flavour in the cola was so mild that it could be missed, though the drink could concievably work well as a mixer.  For a vanilla cola, Coca-Cola is still the best, and Pespsi is also usually available, and preferable to LA Ice's attempt.
Coca-Cola Orange and Raspberry: 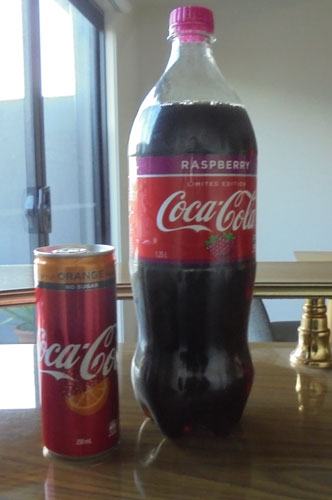 Jitka didn't join Rob and I for the taste test due to her current no-sugar diet, but did contribute Coca-Cola's new flavours after finding them while shopping.  I didn't let on that's I'd already tasted Raspberry Coke, but included it in the festival anyway due to her kind contribution.
I thought the flavour of both Orange and Raspberry was good, with the flavour to cola ratio seeming just right.  It reminded me of the years that I worked at Subway and mixed a drop of Fanta or Raspberry soda to a glass of Coke.
LA Coffee Ice Cola: 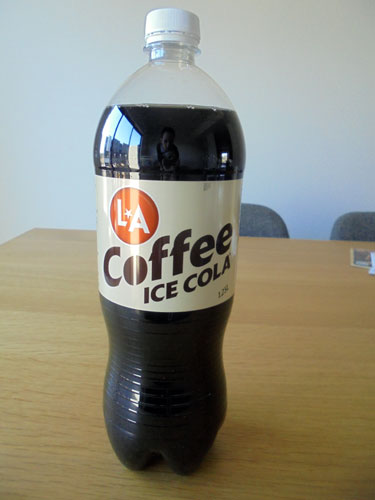 My second attempt to use the IGA voucher produced an even greater surprise.  LA Coffee Ice Cola.  I wouldn't normally buy a drink like this, but in the spirit of the festival, I gave it a try.  I normally don't like cola flavoured with coffee, but, like LA Ice's vanilla, the coffee flavour was very mild.  It isn't one I would buy again, but I liked it more than I expected, and if it remains on sale, it is probably a flavour some people will appreciate.
Que: 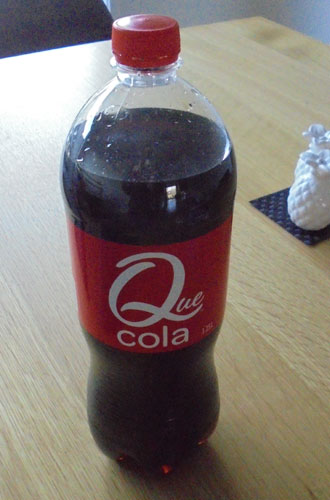 When I noticed that the Coles homebrand cola had been replaced by an alternative called 'Que,' I presumed it was simply a rebrand of their existing cola.  On Twitter, Coles promised I'd love it.  I certainly liked the adoption of the red cola cliché and branding.  I can't be certain, but got the feeling it is actually the same drink as it was when it was simply 'Coles Homebrand Cola.'  (I noticed that the drink is produced by the same factory as LA Ice, giving Tru Blu Beverages quite the showing at this year's festival.)
Still, it is a quality cola for a good price.  It apparently also comes in a can, as I saw someone bring their own to the late night MIFF screening of Caniba.
Tags: cola festival
Subscribe