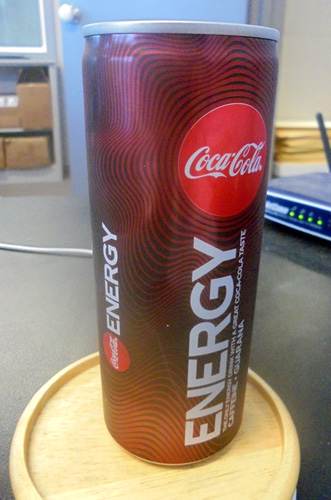 I always like the chance to try something new from Coca-Cola (and, it was their pre-summer release schedule that inspired the timing of the festival for August,) so I was glad to see something quite different from the brand - an energy drink version branded as simple Coca-Cola Energy.
I tried the regular version, with a sugar-free option available. (The can design for each is almost indistinguishable, so I didn't even realise I had choices to consider until later.)  The flavour was interesting, with the tang common to energy drinks, but less pronounced than in V or RedEye.  The cola flavour is not the distinctive Coke taste, but more of a vintage cola.  Overall it wasn't a bad addition to both the cola and energy drink market, though one that was hardly groundbreaking.
Soda Press Co. Blonde Cola: 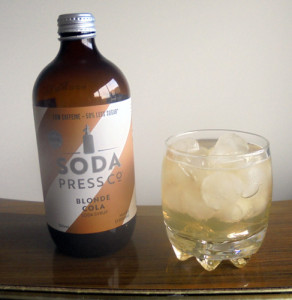 Soda Press Co. are another welcome addition to the apparently burgeoning DIY soda syrup game.  Whilst sitting alongside Soda King and even SodaStream syrups on the shelf Soda Press's syrups might seem a costlier option, the larger bottles seem as concentrated as Soda King's, so the difference is a wash.  Soda Press also produce more exotic flavours, though my first attempt, when I excitedly tried their pink graprefruit syrup, made me realise I mix a lot less grapefruit cocktails than I had thought I might.  A new flavour, Blonde Cola, arrived in time for this year's festival.
When I mixed it, I wasn't sure I had the dosage right.  I'd been expecting the liquid to remain mostly clear, like Bart Simpson's Clear Cola which was available in the early 1990s (peculiarly sold in a car, negating the product's novel clarity) or the new Coca-Cola Clear released in Japan.  Mixed at the prescribed dosage, the result is a pale, almost ginger ale colour.  The bouquet, though, is distinctively cola, almost like the flavour of those Japanese cola bottle lollies.  The flavour was refreshing, though not as distinctively cola as the scent.  I am excited to try the drink as a mixer, and especially curious about how it will work with gin.  It seems like a perfect match for Canadian whisky, being less dry than ginger ale, and not so strong as to neutralise the whisky's flavour.
Pepsi 1893: 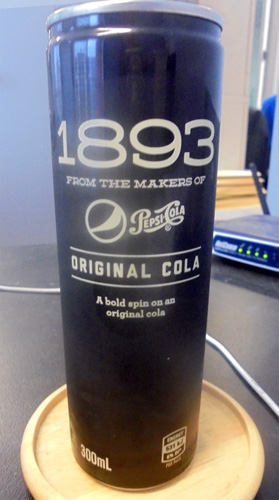 I'd been looking forward to trying PepsiCo's (presumably) heritage recipe since I'd first spotted its appearance, but it took until the Festival to do so.  Unfortunately, I think the reduction in price is probably a sign of the discontinuation of the product line, rather than a generous celebration.
I tried the Original Cola flavour first, and was very impressed.  As expected, it had the base of what I tend to call a vintage cola, but was also more carbonated than these typically tend to be.  Beneath that, deeper flavours rose in the aftertaste, almost like the calm slowBurn of a spirit.  The cola taste was followed by nutty, spicey flavours that truly are quite unique in this market.  I even started to wonder if the drink, as well as being refreshing in the afternoon, might have the medicinal qualities of Pepsin as Brad's Drink had originally intended.
The following day, I sampled the Ginger Cola variant, pleased to find another Ginger Cola on the market after CCA's short-lived attempt.  I was even more pleased when I opened the can: the ginger scent is immediately apparent, but the taste was not overwhelming, as it was in Coke's ginger edition.  The result was an instantly refreshing drink, the perfect balance of traditional cola and ginger spice, added with the right amount of carbonation.  PepsiCo's 1893 varieties were a nice change, and it would be good if they could stay around.
Bickford's Kola Nut: 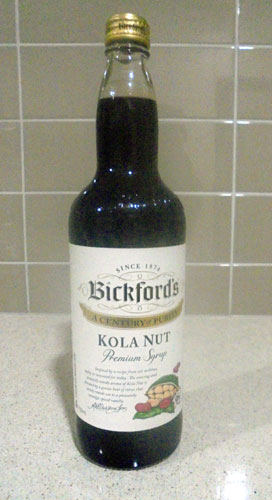 Another syrup, this one is described, oddly, as being archival. Like the 1893 Pepsi, this was clearly reduced as a deleted product rather than in recognition of the Cola Festival (the entire shelf was marked 'Reduced to Clear.')  For $1 per bottle, I thought it was worth a try.  Mixed with soda water, the concoction didn't have a lot of flavour.  Even when mixing well beyond the recommended dosage, the result was mediocre, with slight hints of a Sunnyboy Cola taste, but it is so faint as to render it meaningless.
Nexba Cola:

Billed as 'Naturally Refreshing,' Nexba Cola is one that I have seen and been tempted by at Festivals for at least the last few years, but have never actually sampled.  Something about the product never appealed to me.  Maybe it was the 1990s style graphics on the packaging.  Unfortunately, the flavour also had the same impact on me.  It wasn't bad, and was certainly a refreshing drink as advertised.  It was just kind of bland.  The cola taste was indistinct, and perhaps even closer to something like Creaming Soda.
Lo Bros Organic Cola Kombucha:

Despite being surrounded by Kombucha in my previous job, where everyone seemed to drink variations of the drink at lunch time in my last couple of years, I had never actually tried it before this festival.  I had not realised the drink is promoted as a probiotic, I guess a more refreshing alternative to Yakult, and maybe something with health benefits.  I was not interested in that though, and was just here for the taste.
This was distinctly something with a cola flavour, rather than a pure cola, but the flavour was there nevertheless.  Combined with the flavour was a kind of dryness, like the texture of ginger ale, which was not unwelcome and did not make the drink any less refreshing.  I was also pleased to find that there was a slight carbonation, though not as much as I might usually like.  Still, the drink would certainly be a nice refreshment in warm weather.
Tags: cola festival
Subscribe